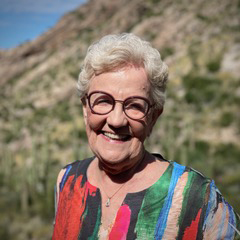 Gwen Powell is a musician, professor and administrator. She was a freelance musician in Phoenix, Boston and Chicago before accepting the principal flute position in the New Mexico Symphony. She sat on the NMSO Board as the orchestra representative and helped negotiate agreements between orchestra members and management.

Her first academic position was Asst. Professor of Music at Oklahoma State University and, later, Director of the OSU Music Department. During her tenure in Oklahoma, Gwen held the principal flute positions in the Oklahoma Sinfonia and Tulsa Ballet Orchestras. She was awarded three touring grants from the National Endowment for the Arts and served on the artist faculty at Quartz Mountain Fine Arts Institute.

Moving to Tucson in the early 1990s, Gwen was founding director of Southwest School of Music and Dance, which served more than 600 marginalized children in Tucson. The former SSMD building is now the Tucson Symphony Center. Later she joined the music faculty at the University of Arizona and developed an entrepreneurship center for musicians known as Camerata.

Gwen and her husband Richard, emeritus VP for Research at the University of Arizona, have been active in arts and research organizations all of their adult lives. She served as President of the National Flute Association, the UA School of Music Advisory Board, Artistic Director of Lake City Arts (CO) Chamber Music Series, and was chair of St. Philip’s Friends of Music, Tucson. She has degrees from Northwestern University and Colorado Western University.